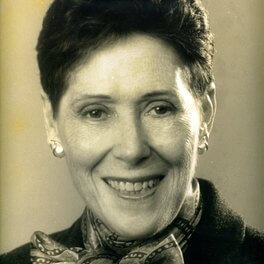 After being diagnosed with Sjögren’s in 1983, Elaine Harris was frustrated by how long it took to identify the symptoms that she was experiencing and discouraged by the lack of information that existed about the disease. Without an existing Foundation or the internet, Elaine was able to find only two patient fact sheets that even mentioned the disease. Determined to take control of her health and learn more about her symptoms, Elaine used her past community involvement to start a local support group with the only other Sjögren’s patient that she met, the secretary of her doctor. Initially determined to simply meet other patients and start a support group, she ended up achieving so much more, growing that support group into what today is the Sjögren’s Foundation. Click here to read a recent interview with Elaine.

Elaine took the initiative to launch an organization that could bring about improvement in support, diagnosis, education, and research for Sjögren’s. With the help of her physicians at Long Island Jewish Medical Center in New Hyde Park, NY, the first meeting of this new group was held in 1983. Six months later, the first issue of The Moisture Seekers newsletter, which has now become Conquering Sjögren's, was published and in the summer of 1985, the Foundation was incorporated. A board of directors was then established with Elaine Harris becoming the first president of the Sjögren’s Foundation.

The next five years saw the Foundation grow – groups and chapters formed across the country, international affiliates were established, symposiums were held to educate the lay public and medical community, and the first Sjögren’s Handbook was published. The Foundation was also invited to participate at prestigious professional conferences and the medical community and government agencies, such as the National Institutes of Health, National Institute of Dental Research, and National Eye Institute, began to recognize the Sjögren’s Foundation as the voice of the Sjögren’s patient.

By the end of 1990, the Foundation Board of Directors voted to hire its first executive director and staff to help handle the rapidly expanding activities of the Foundation and allow for a more professional day-to-day operation. With greater infrastructure in place, the Foundation continued to expand its outreach while also establishing a research program that would support and encourage more effective treatments and an eventual cure for Sjögren’s. This included making the Foundation’s first research grant and awarding its first student fellowship. Throughout the 1990s, the Foundation developed programs to address the needs of different constituencies and focused on growing the Board while also focusing more on various government affairs. The Foundation was invited to testify before a Congressional Committee, and in 1998, April was declared as Sjögren’s Awareness Month by the United States Congress.

In the 2000s, the Foundation moved its national office from Long Island, New York to Bethesda, Maryland. This gave the staff and volunteers better access to Capitol Hill as well as the National Institutes of Health. The Foundation also hosted its very first National Patient Conference in Los Angeles, CA. In 2003, the Foundation hired Steven Taylor as its new Chief Executive Officer to usher in a new era for Sjögren’s. Steve led the Foundation for 18 years and grew from three staff to fourteen full-time staff.

Click here to see many of the Foundation’s most memorable moments over the past 35 years.

You can also visit our Impact page to see various Foundation successes, progress and achievements.